Wall Street Forex Robot 2.0 Evolution claims to have produced a “Rock-solid, accurate and reliable trading tool that can profit in any market.” The creators have made bold claims; for example, they promise to convert ordinary traders into self-made forex millionaires. They have just recently updated the trading bot and promised a high performance for the updated EA. We review the trading techniques, statistics provided, and user reviews to get a clear picture of how this forex bot works.

What is WallStreet Forex Robot 2.0 Evolution?

Wall Street Forex is part of the FXAutomater franchise and is essentially a four-part package. The robot is fully automated which means it can open, manage and close trades for its subscribers. You buy the Wallstreet package and in comes gifts such as the Wall Street Asia, Recovery, and the Gold Tracer.  The bot has been in the market for over a decade and uses low-risk scalping to trade. We have no information about this bot’s creators and origin. The robot’s developers keep improving the robot, and the last update was early this year.

The developers first explain why traders lose their money:

WallStreet Forex Robot 2.0 offers solutions to these reasons by:

Identifying and closing deals in an unbiased manner, using the set trading logic, which gives a consistent and disciplined trading experience. The robot also utilizes low-risk scalping and follows short and medium-term trends, which have proven successful over the years. This also improves your chance at profitable trading.

Wallstreet is a software that doesn’t depend on emotions, which eliminates emotions in trading, making decisions using logic to enhance trading accuracy. FXautomater comprises a team of seasoned software developers and professional traders, which ensures that the robot you get is successful and result-oriented.

The trading bot can trade under EURUSD, GBPUSD, USDJPY, AUDUSD, USDCAD, EURJPY, USDCHF currency pairs. It comes with several features in one package, including:

The bot has the longest relationship with Myfxbook, and the data they provide is verified. It runs on MT4 and MT5 and uses the 15M timeframe when trading. The bot can work using the mini, micro, and a standard account.

The improved system is a low-risk scalper that works well on short and medium trends. The bot has an inbuilt-risk calculator and a Broker Spy Module that verifies brokers and filters out unscrupulous ones, preventing the trader from getting a loss. The bot also comes with an NFA-regulated broker. When trading using this bot, the leverage you can use is 50:1, and a minimum deposit of $1000.

The bot also uses a dynamic take profit and stop-loss technique to protect your funds from loss and to ensure every trade is left at the opportune time to maximize gains. Wall Street Forex Robot

Every sales ploy begins with first impressions, so the first thing we analyze is the robot’s sales page which looks quite appealing. But then again, we expect nothing less from FXAutomater. The sales page gives us enough information, with images, managing to look exciting, cutting edge, and professional at the same time.

The robot’s developers have provided a 20-year backtest for the EURUSD currency pair, which uses the M15 timeframe and an unknown modeling quality. From this test, we can deduce that the supposed trader deposited $2000 initially, which grew a net profit of $180990.40 within the two decades. The profit factor stands at 1.49, which isn’t that impressive considering the time range. The trade’s spread was ten, and the relative drawdown stood at 42.88%. The profit factor isn’t remarkable because the robot made a gross profit of $551892.20 and the trade interest reduced the amount by more than $250000, meaning the risk factor wasn’t that effective then. Of 6352 total trades, the robot was able to win 3102 short and 3250 long trades.

Looking at the stats on this real account, the trader began with an initial deposit of A$866.10 in 2017, making profits amounting to A$1364.99 to date. This translates to 188.23% in total and 0.08% daily gains. The trade uses the 1:500 leverage and the drawdown is at 21.17% so far. The robot won 79% out of 3046 total trades, which is good statistics-wise. The average length of the trades was 4 hours and 51 minutes. The trade has garnered a 1.14 profit factor so far, which isn’t that impressive, especially for an account that has been there for four years.

According to the robot’s analytics, the robot is most profitable, but some months are dreadful, with losses of up to 7.99%. We found user reviews on several review sites. But we will feature a snippet from a popular review site. The bot seems to be getting mixed reviews which aren’t necessarily negative but rank the robot as just an average trader. In one of the complaints, a trader complains of minimal profits with bouts of huge losses that eat into an account’s gains which is what we have experienced from the monthly analytics. 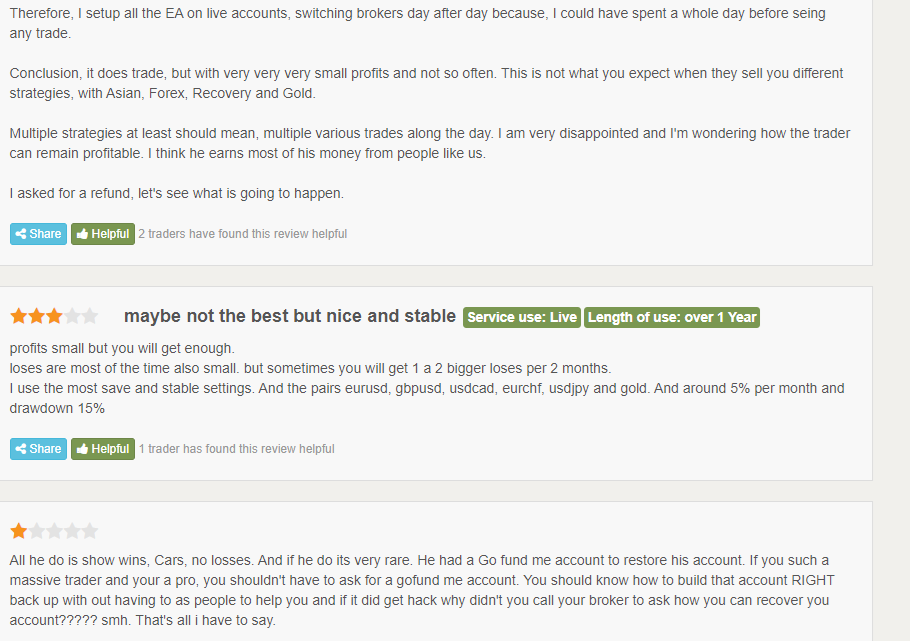 We were a little bit worried because FXAutomater’s packages usually don’t work out well. We feel we should keep this in mind before deciding to invest in the robot. The website itself has a professional feel to it, and the data provided on Myfxbook is verified. The developers have provided us with the results of both real and demo accounts. The robot seems to hold its own performance-wise. The robot’s price has been reduced to $237, which is affordable for the range of services the robot offers. The robot provides suitable enough results to try out, but remember that scalping can prove unfavorable.