Because of its three volatility characteristics and the bot’s site’s claim of a six-year winning streak, Volatile factor 2.0 has crowned itself as the most potent EA in the market today. The site claims that this forex bot is the only trading tool you’ll ever need. We put that statement to the test throughout the article.

We review their website’s user interface, user reviews, stats and backtests to determine whether they’re giving us false promises or not.

What is Volatility factor 2.0? 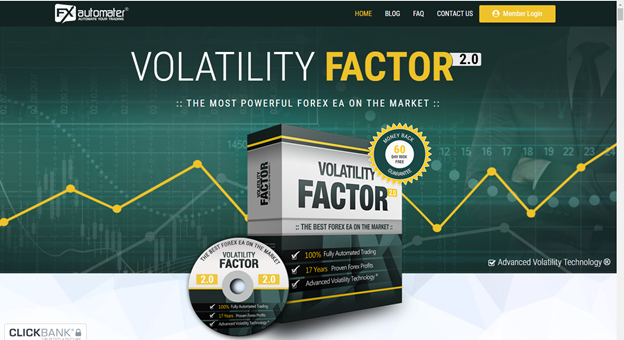 Volatility factor 2.0 is an improvement of a forex bot that has been in the market since 2012. The bot was made by the creators of the FX Automater and is said to have improved in key areas such as:

The bot is compatible with MT4 and ECN and will only operate with an NFA-regulated broker. You can trade on micro, mini and standard accounts, and it guarantees you 100% long-term profit. 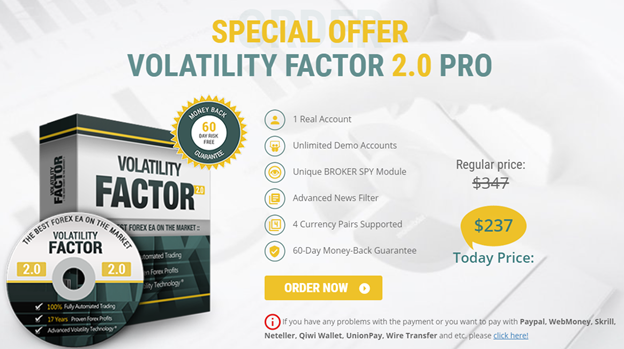 Features of the Volatility Factor 2.0

Aside from the numerous improvements made on the Volatility Factor 2.0, the package costs between 200 and 300 USD depending on the discount in effect when you’re buying it. With this package, you will get one real account, unlimited demo accounts, the broker spy module, an advanced news filter, and support for four currency pairs: GBP/USD, EUR/USD, USD/JPY and USD/CHF. This purchase comes with a 60-day money-back guarantee.

According to its developers, the Volatility Factor’s broker spy module has been in the works for over 2000 hours, and it has been developed and refined to keep unethical brokers away from your investment. It’s common knowledge that brokers usually set high negative slippages, high spreads and delayed order execution to ensure that they win against your bets.

The news filter prevents traders from trading when important news may cause fluctuations in the market’s direction.

For this Forex bot to work, the creators made a three-pronged strategy to create a winning formula. These characteristics include:

General level. This strategy came about because of the ability of currencies to maintain small price fluctuation changes making the changes more predictable.

We start with the robot’s sales page, and it’s quite attractive, with visual aids such as graphs and images showing the trader’s functionalities. It gives off a professional vibe, with the developers displaying evidence based proof in the form of numerous backtests and demo stats.

The site shows us many backtests dating back seven years with different currency pairs, using the 90% modelling quality. There should be a disclaimer that historical performance isn’t a determinant of future bot performances.

We will focus on the GBPUSD currency pair’s backtest. The backtest was done on the M15 timeframe, with a spread of 10 and an initial €2000 initial deposit. The initial deposit grew a gross profit of €4110551.61 within eight years, and due to the 21.15% drawdown, the profit scaled down to €1692312.24. For this backtest, the profit factor stood at 1.70, which is relatively low, with expected normal profit factor levels being two and above. 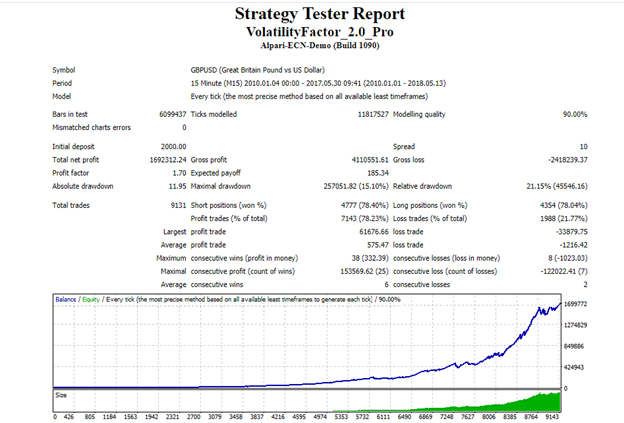 Volatility Pro’s team has provided us access to their demo account’s stats on Myfxbook. We decided to analyze the USDJPY demo, whose tracking record and trading privileges have been verified. The demo hasn’t provided the leverage level for this account.

Looking at the monthly analytics, Volatility Pro 2.0 has been showing growing profits, with the lowest being in January. It experienced its all-time high in March.

We found user reviews, but since they’re from 2012 and 2017, they may be irrelevant right now.

There are many positives and negatives for every money-making scheme, and all you have to do is have enough knowledge to weigh your options. The developers of this robot have provided us with several stats, including backtests and demo accounts. They, however, didn’t deliver the ultimate proof, which is stats from an actual live report. I believe demos and backtests can be cooked, and we can therefore not use them in a robot performance analysis. The backtest and demo, however, show that the robot is an average performer at best.

From the tests, we have also noticed a low drawdown percentage, which shows low-risk trading. This means that the interest won’t eat up too much of your profit. The developers combined advanced strategies and trading tools which could create potential profits for experienced traders. The robot goes for less than others in the market, which could be beneficial, especially to amateur traders who don’t want to use less money on the robot and have enough to invest.

Volatility Pro’s ability to only support four currency pairs does less for spread protection. It is fully automated, which makes it hard to customize. We can’t thoroughly recommend the robot until we see stats from real accounts.