According to FX Traderkit, the company makes both Trader’s Sun and Trader’s Moon; the company has found a way to modify the Martingale system to be more beneficial. We are here to witness the benefits. This is an EA review on Trader’s Moon and analyze the bot’s sales page, how it trades, the user reactions to trading with it, and the tools the bot uses to determine whether you’re making the suitable choice trading with this EA.

What is Trader’s Moon?

Trader’s Moon is a fully automated expert advisor that claims to have modified the Martingale technique to make profitable trades for its clients. The bot utilizes several indicators, including the Bollinger band and Commodity Channel index, in conjunction with candlestick patterns to find and analyze market trends.

The software can support several currency pairs, including AUDCAD, GBPAUD, AUDNZD, NZDCAD, EURCHF, EURGBP, EURSGD, and GBPCAD. If you’re using an ECN account, then this would be perfect for you. The minimum deposit to use is $500. We have no idea who created the FX Trader kit and the origin of the franchise.

Trader’s Moon consists of one package that will cost traders $269. The paid package will include the bot’s software with its user manual, a lifetime license, free updates, and 24/7 support. The bot is compatible with both MT4 and MT5. 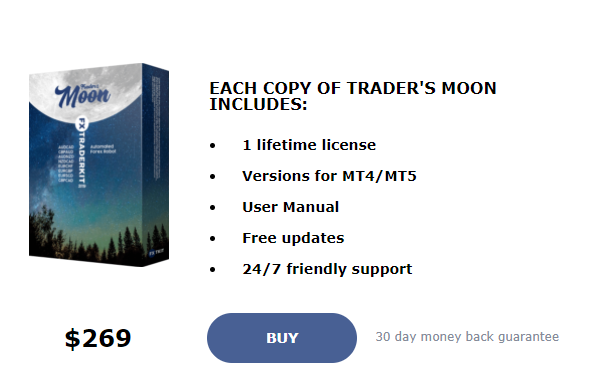 You can get the entire Traderkit, inclusive of both Trader’s Sun and Trader’s Moon, at $405. The good thing about combining robots is that you get the strength of two robots, increasing the spread. You get a 30-day money-back guarantee in case this trader doesn’t work out for you.

The bot’s modified algorithm was a collaboration between several programmers that wrote it in MetaQuotes Language 4. The algorithm went through an optimization phase where they added a software package to simulate slippage and have a floating spread.

To use Trader’s Moon, you will need to work with an excellent forex broker. We all know that Martingale isn’t safe for traders, especially beginners. This is because it works by playing on your losses until you win. What if you never get to win? The bot was designed with several filters to control drawdowns and to run trades to maintain the technique’s working mechanism.

Trader’s Moon uses several indicators to search for signals and then open positions that are beneficial to traders. According to its sales page, the robot uses a news filter to help avoid trading on days with important events that may affect profits.

We start with Trader Moon’s sales page, which the robot shares with its counterpart, Trader’s Sun. The sales page is brief, with scanty information. They only show numerous backtests and stats; otherwise, other than knowing that the robot uses Martingale and the company that makes it, we know little significant information about the trader.

Trader Moon’s backtest focuses on the AUDCAD currency pair. The tests run on M15 and use the 99.90% modeling quality, and the backtest presumably ran for six years (between 2012 and 2018).

The trader, in this case, made an initial deposit of 500, which later grew to a gross profit of 5655.49. The relative drawdown was 22.02%,  and the maximal drawdown, 9.14%. The gross profit was slashed to 2932.54 net profit. The profit factor for this backtest was 2.08, which is good news. The recommended profit factor is usually 2. We calculate the profit factor by measuring the ratio between gross profit and gross losses.

Trader’s Moon went through 1768 total trades for this backtest. Out of these, the robot won 1050 short positions and 718 long ones. The most significant profit trade was 45.26, and the most extensive loss trade was -20.81.

The developers here shared stats from a real account. Myfxbook verified both the track record and tracking privileges. We don’t know the leverage ratio, but the account began with a $3,703.22 deposit in December 2018. This account has grown over the years, and we can see that the trader made several transactions. Its balance is currently $2,321.25, but the trader is active and has withdrawn $3,436.22 so far. The account has accrued $266.14 interest so far. From the stats, we notice that the account gains 0.14% daily and 4.19% monthly, which is higher than what most trading robots get. The drawdown is, however, disappointing at 41.35%. This percentage is very high and has the potential to reduce the gross profit significantly. Overall, the account has gained 238.23% up to this point.

Looking at the trades, the robot has been able to win 1323 out of the 1763 trades. Trader’s Moon seems to work on long trades, with the average trade length being two days. The profit factor is 1.66, which is a little lower than what the backtest gave.

Looking at the monthly analytics this year, the trader seemed to be doing well until that changed significantly in May. We haven’t found any user reviews from the popular review sites out there.

We will start with the robot’s strategy, which is Martingale, and no matter how modified the technique is, it’s not favorable, especially for amateur traders. This methodology can tank even the most profitable accounts out there. The actual account’s drawdown can give you a clue on how high risk this strategy is.

The robot’s developers aren’t straightforward, right from who they are, where to find them and where the robot’s software is hosted; everything is blank. Because this is something people are investing real money in, it would be imperative to share at least Trader’s Moon’s trading strategy.

Trader’s Moon is a high earner; what kills its vibe is increased interest and other inevitable charges that significantly reduce gross profit. The robot has no user reviews, and we can’t gauge whether the numbers they’ve given us are true. User reviews usually offer insights into the real trading performance. I would recommend starting slow with this trader and using the 30-day money-back guarantee if necessary.