News Action Trader was designed for traders who want to earn from Global Forex News. According to the bot’s sales page, the trader is a sure-fire way of income generation through minimal risk within a small time frame. We perform an EA review on the News Action Trader bot’s working mechanisms, sales website, and trader reactions to trading with it.

What is News Action Trader?

News Action Trader is a fully automated forex bot that leverages global news to gain profit. The bot is part of LeakFx, a company that makes similar bots and was founded in 2012. According to the EA’s website, News Action Trade’s developer is Mikhail Zaprudin, a former software engineer with a background in real-time system creation.

Mikhail claims to have created the News Action Trader using inspiration from his previous electric surge management system to respond to incoming ones quickly. He has tried and tested the bot while making modifications to create the best news trader in the market. The site guarantees 50%, 100% and 150% profit when you use their site.

You can subscribe to the bot using two ways; the first way is to pay two $247 instalments per month or a lifetime payment of $397. When you choose any of the payment plans, you will get access to the robot’s software, a lifetime license, updates and support. The development team provides support via e-mail, skype and Telegram. You will also be able to trade using six currency pairs and a 30-day money-back guarantee for the package regardless of which payment option you chose.

News traders usually require fast and stable internet connectivity because the trader has to scour the Internet promptly for news. News trades take less time, and you have to take advantage of it when the news is still hot.

The bot runs on both MT4 and MT5 and uses technological advancements to quickly identify and follow through with practical strategies to ensure a trader doesn’t take huge losses. Your funds are protected with this bot using the stop loss technique and the ability to withdraw the trade when uncertain of the outcome. This technique makes it a low-risk trade. What sets this bot apart from the myriad of bots out there?

The robot works by filtering information in real-time to identify significant news and the correct time to enter and exit trades on a profit. News filtering is an effective way of reducing spreads and slippage. Being automatic, the robot can open, manage and close unprofitable trades for you depending on the market’s volatility.

New Action Trader supports six currency pairs: AUDUSD, AUDJPY, USDCAD, NZDUSD, GBPUSD, and XAUUSD. The bot works by using its advanced news identifier to get news before it breaks and adjusts its parameters according to the best outcome. You need to remember to connect with a forex broker to use this bot efficiently.

Features of the News Action Trader

LeapFX’s website hosts several sales pages for the robot it hosts. News Action Trader’s sales page follows the hype man routine, where the developer bombards you with huge figure promises and a youtube video testament from the developer. You are also tortured by too many words, with no substance thrown at you.

News Action Trader hasn’t provided us with backtests on their sales page, although they have shared their live data with Myfxbook to analyse. It isn’t easy to create backtests for News traders because of the many parameters that need to be factored in to get close to accurate results. An example would be how to factor in news influence while backtesting.

We noticed that the last time they haven’t updated the account this year, and no further data is available. The site still uses old statistics to show success, yet the bot dived a year ago. We were unable to find any user reviews from popular review sites on the Internet. 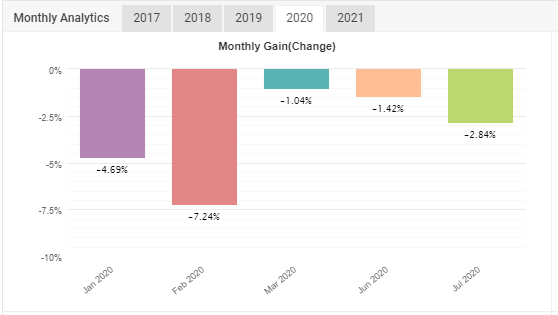 The robot has a 3-star rating on Forex Peace Army and yet no user reviews.

Mikhail gives us an entire narrative on how he left his software engineering job to start making bots, but this is a narrative many forex sites use. We have noticed this trend: When someone brags about their engineering background and how they’ve used their app for years profitably, that’s probably going to end up with a scam.

The gains seem believable and are verified by Myfxbook. Still, the one Myfxbook account they’ve provided isn’t updated, which means that the account was either closed or has undergone a terrible performance that won’t reflect the robot well. This bot has no reviews since its inception in 2012, so essentially we can’t speak to the robot’s reliability. We don’t recommend using the software to trade.