Happy Algorithm Pro uses statistics to determine the correct market entry and exit points. The calculations are also suitable for analyzing stop loss and take profit to ensure traders can leave a trade with a win every time. We perform an EA review of Happy Algorithm Pro, check out its stats, history, sales page, verified data on Myfxbooks, and user reviews to understand its strengths.

What is Happy Algorithm Pro?

Happy Algorithm Pro is a fully automated trading bot that Happy Forex created. The company has been vigilant in the forex robot business, with over ten forex bots already in the market. For these creators, vigilance doesn’t include identifying themselves.

Happy algorithm Pro was made for both MT4 and 5. Its package comes in two price points depending on your budget and purpose. The basic version costs €299 and the second €499. The basic package contains several features, including:

The $499 package incorporates all the primary plan’s features and five licensed accounts. The forex bot is compatible with Windows (7, 8, and 10), macOS, and Linux. This robot needs to work with an ECN account. As is usual with Happy Forex, the minimum deposit is $100.

The robot works by performing in-depth statistical analysis to measure a viable stop loss and take profit to ensure that the account enters and exits each trade at optimal levels. This can seem complicated, but since the trader is automated and doesn’t need anything else, you’re good to go.

Happy Algorithm Pro complies with FIFO rules. The bot is easy to install and understand; it also performs an auto-quotes detection of 4 or 5 digits. According to the sales page, the license only covers the first month. After this, traders get free lifetime licenses via email each month.

In a bid to make the robot better, the developers have made a few amendments. These include:

We start with a review of the robot’s sales page. Happy Forex robots’ have one thing in common, which is brief sales pages with a focus on the current update available. It’s the same for Happy Algorithm Pro too. The sales page offers little explanation of how the robot works or who created it.

The developers haven’t posted any backtests yet, but they have provided live performance results on Myfxbook.

Happy Algorithm has provided us with results from a confirmed account whose tracking records and trading privileges were verified. The robot was at this time running on the 1:500 leverage. We see that the trader began with a $1,000 deposit in December 2020, which has made a $92.42 profit so far. The account earns 0.05% daily and 1.63% monthly. The drawdown is 12.78%.  The total gain is 9.24%.

We can tell from the analytics that the robot is suffering this year. The profit margins keep moving up and down and aren’t stable. 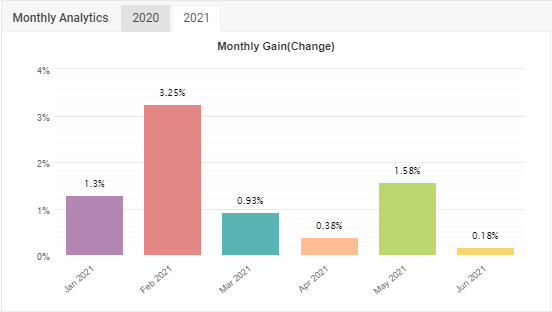 We liked the robot’s trading strategies until we got to the drawdown. The risk is massive. Over the last month, the drawdown spiked and hasn’t gone down since. The drawdown can be described as the difference between the winning and losing trades in a trader’s account. The higher the drawdown, the more the losses. When the drawdown is extended for an extended period, it’s usually safer to cut your losses.

Happy Algorithm Pro is beneficial in that it offers frequent updates to its traders. This ensures that they always have up-to-date settings and that the parameters are optimized at all times.

This bot uses math to create the optimal robot for you, but math hasn’t helped its profit at all. According to Myfxbook stats, the account has only made 9% profit in six months which is relatively minimal. The robot has only made around $90 in profit, making this a low earner compared to other robots in its size.

Knowing the bot’s creators would have been a consolation prize, but that seems like a tall order for forex sites. Happy Algorithm pro isn’t worth the trouble.